The second volume of the National Report of the First Nations Regional Health Survey Phase 3, released today by the First Nations Information Governance Centre (FNIGC), provides unparalleled insight into a wide array of factors, from language and culture to health-care access and food security, that affect the health and well-being of First Nations people living on reserve and Northern communities across Canada.

This final volume, which marks the conclusion of a landmark five-year survey process conducted by FNIGC and its Regional Partners across the country, explores national RHS Phase 3 data related to health-care access, language, culture, nutrition, food security, physical activity, and personal and community wellness. Among the RHS Phase 3 Volume Two’s key findings are: 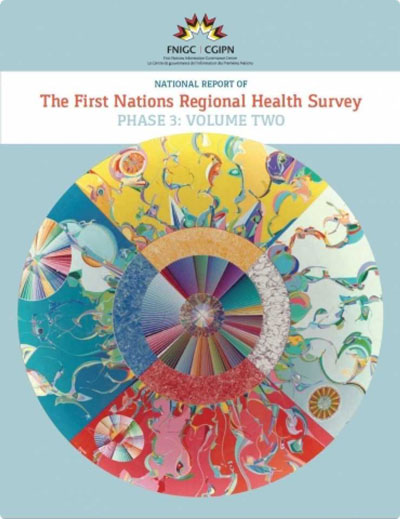 “The results from the second volume of this essential First Nations-led report reveal some of the strengths, challenges, and resiliencies of our First Nations communities across the country, while also challenging a lot of common assumptions and misconceptions,” says Dr. Jonathan Dewar, Executive Director of FNIGC.

“It’s my hope that the information contained in the RHS Phase 3 report will serve to inform decision-making at all levels of government, as well as contribute to a richer body of knowledge about the ever-changing nature of life in First Nations communities, for researchers, policy makers, politicians, media, and the general public.”

The RHS was the first—and is still the only—national health survey created, conducted, and carried out by First Nations people for First Nations people. Launched in 1997, the RHS is rooted in Traditional and Western understandings of health and well-being and gathers information in First Nations reserve and northern communities across Canada.

RHS Phase 3, the latest phase of the survey, began data collection in April 2015 and wrapped up 18 months later finishing with 23,764 surveys completed in 253 First Nations communities, or 78 percent of its target number—a highly successful response rate for a survey of this size and complexity. The results of the second volume of the RHS Phase 3 are contained in the National Report of The First Nations Regional Health Survey Phase 3: Volume Two, which was released today during the Assembly of First Nations’ Annual General Assembly in Vancouver, British Columbia.

Copies of the 168-page report can be downloaded from our Online Library or by visiting FNIGC’s booth (#261) at the Circle of Trade at the Vancouver Convention Centre East, 999 Canada Place, as part of the Assembly of First Nations’ 39th Annual General Assembly.

FNIGC is an incorporated non-profit organization operating with a special mandate from the Assembly of First Nations Special Chiefs in Assembly (Resolution #48/2009). First Nations-led, FNIGC envisions that every First Nation will achieve data sovereignty in alignment with its distinct worldview.

Announcing the recipients of the 2021 FNIGC National Student Bursary Program