Over the past two-and-a-half years our Power of Data series has travelled across the country in an effort to find examples of the real-world benefits that data from the First Nations Regional Health Survey (and other surveys) have had in First Nations communities.

Starting in Ottawa, we visited a Mi’kmaq community in Nova Scotia, a Tr’ondëk Hwëch’in community in Yukon, a Mohawk community in Quebec, and a Carrier community in the BC interior, learning along the way about the subtle and substantial power that quality data has had over the years.

The latest in FNIGC’s series of community articles is a particularly powerful one, as it examines the role that data played in changing the fortunes of an entire community.

In order to tell the transformative story of Bigstone Cree Nation, we spent two days in the sprawling Northern Alberta First Nations community where we talked with the Chief, the Directors of Health and Education, residents and an Elder. The story we came away with was about how this defiant Cree community tackled its reputation as “the sickest First Nation in Alberta” and over the course of two decades transformed itself into one of the healthiest in the province.

According to Bigstone’s Chief, the key to this significant change was simple: determination and good data.

“You have to be tough, smart, and plan for everything.” Chief Gordon Auger told us. “That’s how you move forward. It’s about hard-core politics and smart planning. I’ll tell you nobody will give you anything without information.” 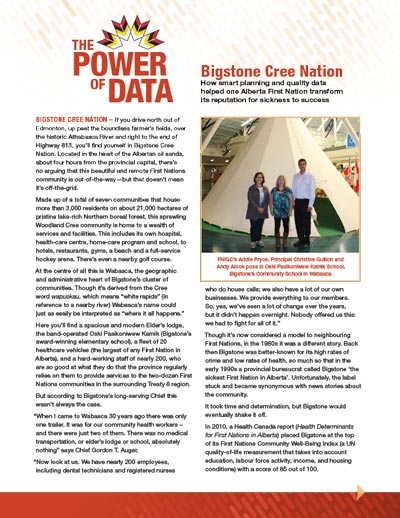 The series was launched in spring 2015, and since then we’ve published six stories exploring the importance of data in First Nations communities.

You can download the latest article on our site (in English and French) here:

Do you have a Power of Data story in your community that you think we should focus on in a future story? Drop us a line at [email protected] and tell us about it.